Kim Kardashian has attempted to “break the internet” on several occasions, by posting sexy photos. But, when she attempted to do so this last week, she created the biggest uproar yet. Stories covering her latest nude photo and the public response that followed have dominated the online landscape this week.

It all started when she posted this photo two days ago, with the caption “When you’re like I have nothing to wear LOL.”

Working at E!, I am immersed in Kardashian news all the time. When I saw this picture come up, I didn’t think much of it. Tracking Kim’s career over the years, it’s very clear that she loves her body and enjoys using it to her advantage. Her body has driven her career in many different ways, from photo shoots, to fashion partnerships, to the sex tape that started it all. After the sex tape madness, I think Kim tried to hide her body from the public eye for a while and focus on other pursuits. But when some of those projects failed (anyone remember her music video?), I think she realized that her body is an incredible asset that she would be stupid to ignore.

The last time Kim “broke the internet,” it was with this photo:

When this magazine spread came out, the response was mostly positive. Yes, there were those people who thought it was overdone and tacky. The Kardashians are not everyone’s cup of tea. But, there weren’t any celebrities speaking out and attacking her for the photos. Some people even applauded her for embracing her body and insane level of fame in such a tongue in cheek way. Unfortunately, her latest photo did not receive the same response.

Since Kim posted her latest photo, the response has been insane. Anyone and everyone has had something to say about it. News outlets have been booming with different opinions. More than before, celebrities have spoken out about the photo. Unlike her past scandalous photos, there have been some scathing comments on social media. In particular, Bette Midler’s comment about Kim Kardashian set off a fire storm:

Bette is not a fan of Kim K.

Now, I love Queen B. I applaud her honesty and blunt attitude towards Hollywood. I follow her on Twitter and I respect her tremendously, for her career and overall wisdom about life. I think she said this in the realm of her usual humor, wanting to poke fun at extreme things in Hollywood. She doesn’t like to keep her mouth shut on big issues in the public eye. One other celebrity jumped in on Team Bette: Chloe Grace Moretz. She sounded off with this tweet:

The tweet cuts off, but I’m guessing it ends with…their bodies.

I don’t think Bette Midler could have expected the backlash that would come from her comment. In response to Bette and Chloe’s tweets, many people felt that Kim had been treated unfairly. Many people saw no reason for the negativity. Celebrities quickly jumped to Kim’s defense: 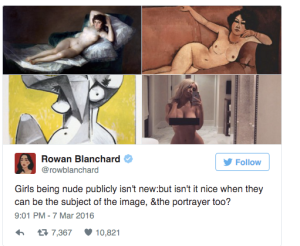 Kim didn’t take Bette and Chloe’s comments sitting down. She sent some jabs back at Bette Midler and Chloe Grace Moretz on Twitter, calling them out for their negativity. Kim is very aware of her powerful status within the celebrity world and she isn’t afraid to defend herself:

Throwing shade at Queen B.

Chloe Grace Moretz is not on Kim’s radar.

In watching all of this unfold, the unnecessary fighting between women was very disappointing. A proud feminist, I truly believe that as women, we are already fighting an uphill battle in our society. The glass ceiling is still firmly in tact and we need to fight to get what we deserve in and out of the workplace. Because of this, petty fighting sets us back even further. Yesterday was International Women’s Day. I adore this day because it serves to remind women that we are valuable, we are strong, and we are worthy of respect in our society. It’s a wonderful thing. And yet, this Twitter feud was unfolding at the same exact time. When I watch unnecessary bickering between women, I think of this: 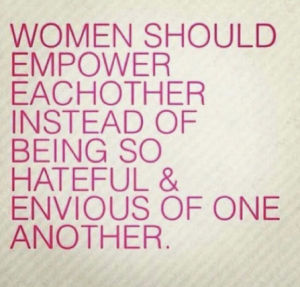 Life is short. We only have so much time to make an impact. We should spend that time loving and supporting each other, as opposed to tearing each other down. Though I am not a big Kim Kardashian fan, I am a fan of the extended response that she posted on her website, about the entire situation:

”I don’t do drugs, I hardly drink, I’ve never committed a crime – and yet I’m a bad role model for being proud of my body? It always seems to come back around to my sex tape. Yes, a sex tape that was made 13 years ago. 13 YEARS AGO. Literally that long ago.

And people still want to talk about it?!?! I lived through the embarrassment and fear, and decided to say who cares, do better, move on. I shouldn’t have to constantly be on the defensive, listing off my accomplishments just to prove that I am more than something that happened 13 years ago. Let’s move on, already.

I have. I am a mother. I am a wife, a sister, a daughter, an entrepreneur and I am allowed to be sexy. It’s 2016. The body-shaming and sl*t-shaming – it’s like, enough is enough. I will not live my life dictated by the issues you have with my sexuality. You be you and let me be me.”

The Kardashians are completely over the top. Their level of fame is so excessive and off the charts, it’s mind boggling. I know many people can’t respect them for the way that they conduct business. They are “famous for being famous.” All of that aside, no one deserves to be attacked for their body. As mentioned above, women are already at a disadvantage in our society. In particular, Ariel Winter’s response to Kim, which pointed out that Justin Bieber didn’t receive a backlash from his nude photo, really stood out to me. This so true! There is a double standard and as women, we need to life each other up, to reverse the stigma.

Additionally, I think this particular story shows the dangerous side of social media. It can create a mountain out of a mole hill, with everyone showcasing their opinions on such a public platform. Would I have posted a picture like Kim? No. Do I think it’s wrong that she did? No. To each their own! I will always support a woman who loves her body. There is enough hate in the world. In this case, I truly believe that you don’t have to agree with what Kim Kardashian did. But you don’t need to attack her either. As she mentioned in her response “You be you and let me be me.”